Do you live nearby someones WiFi hotspot and everytime your laptop search for a internet connection and your neighbors hotspot name showing up? But you can't access and use that connection because you don't have the authorization password?

No problem, I'll show you How you can hack/creak that network and use unlimited free internet.
Almost every neighbor will not let you to use their Wi-Fi at free but I'll not let you to pay anything for that internet. By reading this tutorial you will be able to hack any type of WEP/ WPA/WPA2 Wi-Fi hotspot key or passwords of your neighbor.
No more paid internet! See our Wi-Fi hacking tutorials using CommView Wi-Fi, Beini iso, Linux backtrack. & Wireshark Network Analyzer.
In this tutorial I’ll show to hack any WEP/WPA/WPA2 Wi-Fi connection using a bootable USB and beini.iso!

3. UNetbootin software to make your USB bootable. [Download for Windows,Linux or Mac]
1. Write beini.iso on your USB by UNetbootin. Set everything according to this image bellow.
2. After finishing restart your PC and boot it from your USB.
3. If you were successful to boot up then you should see something likethis. Click Minidwep-gtk.
5. Now Minipwep-gtkprogram will open. Click Scan.
6. Select a wireless network(should have Clint) from thelist. And click Lunch to start creaking process.
7. Sometimes its take a while according to your victimconnections IVS value and password strength. So keep passions.
8. If it found a password, it should appear like this.
=> To creak WPA/WPA2 followthis instruction showing in the image bellow.
=> Watch this video tutorial if are not getting the above manual process.
Got a question for me? OK. leave it to the comment box bellow, I should get back to you immediately!
See also:
How To Turn A Laptop or Desktop Into A WiFi Hotspot Easily!
How to Hack any Email account passwords easily!
How Do You Detect If Someone are Stealing Your WiFi!
How To Hack Wi-Fi Using Linux Backtrack!

Updated Users are urged to continue using WPA2 pending the availability of a fix, experts have said, after security researchers went public with more information about a serious flaw in the wireless encryption protocol.

So-called Key Reinstallation Attacks, aka KRACK, potentially work against all modern protected Wi-Fi networks. Depending on the network configuration and the device targeted, it is possible to inject and manipulate data as well as eavesdrop on communications over the air. The only main limitation is that an attacker needs to be within range of a victim to exploit these weaknesses.

It affects WPA2 Personal and Enterprise, regardless of the encryption ciphers used by a network. It mostly affects Linux and Android 6.0 and above, as well as macOS and OpenBSD. Windows and iOS are more or less unaffected due to the way they implement WPA2. Gadgets from Cisco, Linksys and other networking gear makers are also vulnerable. You should obtain and install software patches as soon as possible, from your operating system vendor or hardware suppliers, to fix up the WPA2 design flaw.

Mathy Vanhoef of KU Leuven, one of the security researchers who discovered the specification blunder, warned that the security hole stems from a fundamental cryptographic weakness in the latest generation of wireless networking rather than a programming cockup.

Simply changing Wi-Fi network passwords is not going to help – software and firmware will need to be updated to workaround this deep design error:

The weaknesses are in the Wi-Fi standard itself, and not in individual products or implementations. Therefore, any correct implementation of WPA2 is likely affected. To prevent the attack, users must update affected products as soon as security updates become available.

KRACK targets the four-way handshake of the WPA2 protocol and relies on tricking a victim's device into reusing an already-in-use key. This sleight of hand is achieved by manipulating and replaying cryptographic handshake messages.

“When the victim reinstalls the key, associated parameters such as the incremental transmit packet number (i.e. nonce) and receive packet number (i.e. replay counter) are reset to their initial value,” Vanhoef explained today on a microsite about the attack. “Essentially, to guarantee security, a key should only be installed and used once. Unfortunately, we found this is not guaranteed by the WPA2 protocol. By manipulating cryptographic handshakes, we can abuse this weakness in practice.”

An attacker can force these nonce resets by collecting and replaying retransmissions of message three of the four-way handshake.

A nonce is a number that is not necessarily a secret but is meant only to be used once and never repeated. The flaw in WPA2 allows a nonce to be – or forced to be – repeated, thus allowing an attacker to extract the WPA2 session key and decrypt and compromise all wireless traffic for that session.

As a proof-of-concept, Vanhoef has published a demonstration of how a key reinstallation attack might be carried out against an Android smartphone. Android and Linux are particularly susceptible to the WPA2 flaw because a bug in the platform's widely used wpa_supplicant tool zeroes the key during the eavesdropping, thus the Wi-Fi traffic can be trivially decrypted.

In short, other than Windows and iOS, the vulnerability can be exploited on various operating systems, computers and devices to decrypt any information transferred over the air that isn't already encrypted with HTTPS, TLS, a VPN tunnel, or similar.

Worse, there's a bug in wpa_supplicant that causes the key to be set to all zeroes when you do this attack, so all traffic is trivially decrypted when attacking Linux and Android clients.

Crypto expert Arnold KL Yau told El Reg: “This sounds bad. However, a significant amount of the risk would be mitigated for services that use strong encryption at the transport or application layer (such as TLS, HTTPS, SSH, PGP) as well as applications secured by encrypted VPN protocols.

'Despite this, however, the ability to decrypt Wi-Fi traffic could still reveal unique device identifiers (MAC addresses) and massive amounts of metadata (websites visited, traffic timing, patterns, amount of data exchanged etc.) which may well violate the privacy of the users on the network and provide valuable intelligence to whoever's sitting in the black van.”

Research behind the attack will be presented at the Computer and Communications Security (CCS) conference in November, and at the Black Hat Europe conference in December. A technical paper titled Key Reinstallation Attacks: Forcing Nonce Reuse in WPA2 is available here. Frank Piessens of imec-DistriNet, who supervised his research, is credited as joint author of the paper.

Previous research by Vanhoef in related areas of HTTPS and Wi-Fi security can be found here and here.

Computers and modern phones are easy to patch, but it's the embedded devices and Internet-of-Things gizmos that are tricky to upgrade to address the WPA2 flaw.

Mark James, a security specialist at ESET, told us: “One of the biggest concerns here of course is getting routers patched - firstly getting the average user to check and apply any firmware updates and secondly, some older routers may not even have a patch available - the average household would acquire an auto-configured router, install it and forget about it, until possibly they change their internet provider. Here, they may go through the same procedure; too many people never check or implement router updates as it’s something often too complicated for the home user to be involved in.”

This guide will tell you How To Solve Sun Dial Puzzle In Assassins Creed Origins so that you can finish the Final Fantasy XV cross-over event, complete the quest and obtain the special Final Fantasy cross-over items. This puzzle is part of the A Gift from the Gods side quest. Assassin's creed origins sundial puzzle answers.

Below is a video by Vanhoef demonstrating the wireless security weakness in Linux and Android. ®

Check out this follow-up article for details on patches and caveats to KRACK.

Sponsored: How the CLOUD Act affects your company's data

It offers an array of WiFi security audit tools. Beini is easy for newbie to used compare to BackTrack, which is the popular system used to crack WEP/WPA. 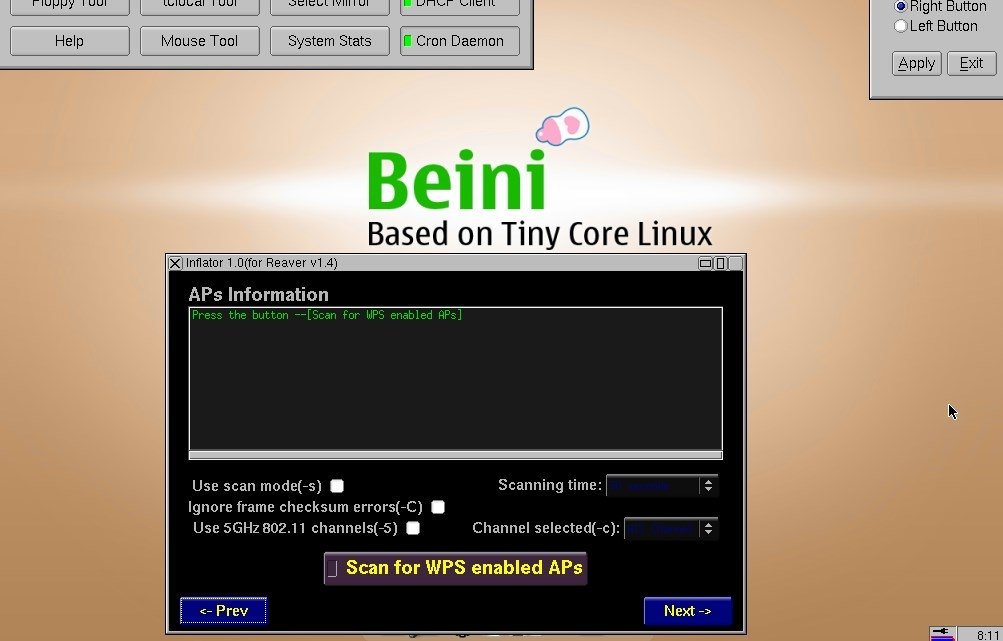 The latest version was released in April 2013.